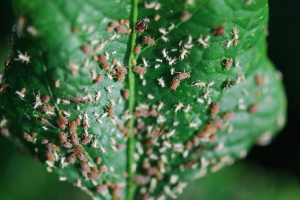 In a recent blog post, I talked about the fact winter’s colder temperatures, especially here in North Texas, do not necessarily kill all your lawn and garden pests – many live to fight another day. One way we battle these overwintering pests such as aphids, mites and scales before they become active in the spring is with dormant oil (sometimes called horticulture oil) sprays.

Dormant oils were originally developed to treat otherwise hard-to-control pest problems on fruit trees. These highly refined oils are sprayed on shrubs and the bark of trees during the winter months when plants are dormant (November through February). They kill difficult-to-eradicate microscopic pests in a number of ways, by either suffocating them or disrupting how they feed.

Dormant oils pose few risks to people and do not harm most beneficial insects. Toxicity is minimal, at least compared to alternative pesticides, and these oils quickly dissipate through evaporation, leaving little residue. Further, dormant oils also are easy to apply using proper spray equipment and can be mixed with many other pesticides to extend their performance.

That said, it is important to know what you’re doing when applying dormant oils, as improper application can lead to disastrous results. Dormant oils should never be applied to plants when there is a danger of freezing or when plants have emerged from dormancy. They should also not be applied to plants that are stressed out. In all of these instances, phytotoxicity can result (poisoning). Other plants such as pansies, bluebonnets and snapdragons growing under or near plants to be treated need to be completely covered and protected.